In the Southern stretch of Alsace, Domaine Ernest Burn cultivates 10 ha of vines in the village of Gueberschwihr. 70% of Burn’s vines are in the Grand Cru Goldert, with a majority of that 70% in the Clos Saint-Imer (a monopole atop the Goldert hillside). Clos St. Imer is a historical vineyard of Alsace (5 hectares in area) reclaimed by Ernest Burn in 1934. Burn farms Gewurztraminer, Muscat, Pinot Gris, Riesling and Sylvaner, each with their unique character, bear the imprint of their grape variety, their terroir which is dominated by the marine oolithic limestone. These vines reflect 350 years of family winemaking tradition for Francis Burn and his wife Simone who pursue the ideals they received in inheritance: respecting the ecosystem of the vineyard and traditional vinification.

The original cellar, where the foudres and tanks are still kept, dates back to 1623! One of the oldest wine villages of Alsace, Gueberschwihr, features Renaissance houses and a Romanesque bell tower (12th century) linked to the legend of St. Imer…which dates back to the 8th century! 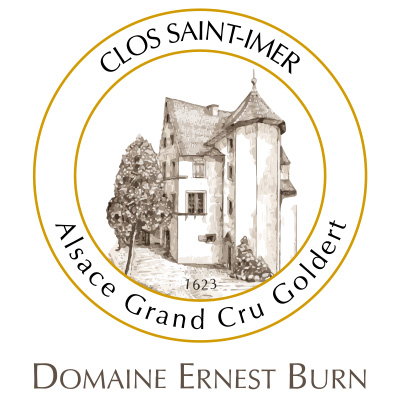